Joined 2 mo ago
·
7 Posts
So short story is that I am a VW/Audi guy but the girlfriend bought a 2020 Crosstrek Limited about a month ago. Just like with my top of the line VW Alltrack I was annoyed with the factory mix and LED/Filament bulb installations. All went well changing bulbs out until I got to the front turn signals. Tried about 5 different mid-premium range bulbs and they would be fine until they heated up then hyper-flash. I did not want to cut/alter any wires with resistors and wanted to keep the bulb seal in factory housing.

SOLUTION:
I could never find the turn signal socket by itself but noticed a Denso/Toyota part number on a different harness and went down a rabbit hole. Discovered the bulb socket unplugs separately from the harness and found that male/female harness.

I searched for the harness and went the lazy route off of Ebay with the versions that already have wires in them. The parts can be purchased from Toyota dealer stock but dont have pins/plugs in them. It also seems the harness was used for the Toyota Camry power steering pump or something so I found some used ones for a little cheaper. FYI.. (1) spot on plug is Negative and (2) + (3) are positives. (2) is only position active at least with Limited projector headlights but I also wired (3) to use both filaments since Subaru still used a 7443 socket.


I first tested the harness with the Philips 21w resistors but those didnt work after heating up and hyperflash demon returned. So I used some 50w resistors I had from a 7443 harness I had ordered off of Ebay. The link I put below are the resistors I used but I'm sure any 50w ones would work.

So yes the finished product isn't pretty but that's mainly because I was messing with things soo much. That last pic is it installed on the driver's side. I ran my self test of blinker each blinker running for 5 minutes too get things scorching hot and no hyperblink. Tested engine on and just ignition on. Cheers.

19 Crosstrek Limited ORANGE
Joined 3 mo ago
·
37 Posts
Nice work, I like it! I currently have some "resistor free" bulbs installed front and rear, but they hyper flash. Looks like I'll be doing this now!
► Show Full Signature
John Tobias
E

JohnTobias said:
Nice work, I like it! I currently have some "resistor free" bulbs installed front and rear, but they hyper flash. Looks like I'll be doing this now!
Click to expand...

Start with the fronts. The rear didn't seem that sensitive at all. The link for the rear reds I used are below. She ran them for a month with no hyper. 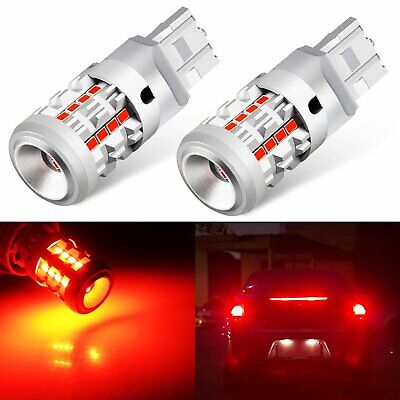 Subaru Crosstrek XV 2015
Joined 4 mo ago
·
22 Posts
You know there are some LED bulb I am using built in resistors?

Nervous-Temperature said:
You know there are some LED bulb I am using built in resistors?

Yes. The ones I tried would hyper-flash after heating up.
1 - 5 of 5 Posts
Join the discussion
Continue with Facebook
Continue with Google
or sign up with email
About this Discussion
4 Replies
3 Participants
Last post:
e92dream 14 d ago
Subaru XV Crosstrek Forums
At Subaru XV Forum you'll find fellow Subaru XV Enthusiasts to help perfect that Subaru Crosstrek Build, or share all kinds of information about this Subaru from its specs to its design.
Full Forum Listing
Explore Our Forums
Subaru XV General Discussion Forum Interior, Audio, and HVAC New Member Introductions Appearance and Body Engine and Drivetrain
Popular Communities